Is Twitter Still Relevant as a Social Media Network?

With all of the marketing automation tools available, is Twitter still relevant or has it lost its luster?

Is Twitter still relevant as a useful social media tool?

Is the party over?

Has Twitter become a one-way conversation with everyone talking and no one listening?

These are questions that I have been wrestling with lately along with many others who make a living in social media and digital marketing.

Experts from around the web are very conflicted on the question. Some say yes, Twitter is still relevant and one of the best ways to drive traffic to your website, while others are writing obituaries.

There is currently a hashtag called #RIPTwitter that is trending due to a report on BuzzFeed that surfaced in early February 2016 about the new algorithmic timeline that would alter the essence of how the network works.

With all of the utility apps like Buffer, Hootsuite, Crowdfire, etc. it is entirely possible to automate your entire Twitter experience and never engage directly with a human being or brand.  (if you are looking to increase engagement on twitter we wrote a great article that may help). Judging from my own personal experience and the sheer volume of junk in my Direct Message Inbox, it seems like many are taking the full automation route and the network is becoming a cesspool of pre-scheduled Tweets and automated DM’s and automated Twitter Lists.

What made the network so great, and what’s been lost to a certain extent is engagement.

Before you label me as Mr. High and Mighty, I must confess that I like many others have largely ignored my own Twitter account and have put it on auto-pilot.  I AM GUILTY AS CHARGED!!

On my account, articles are posted from our company blog three times per day, new Twitter followers are re-followed or ignored and that is the extent of my involvement with the network.

I am guilty of set it and forget it.

The Problem with Automation

The problem with all of this automation as I see it, is that AUTHENTIC ENGAGEMENT is lost, and it defeats the purpose and potential of this social media channel.  It relegates Twitter to nothing more than WHITE NOISE, a broadcast channel where everyone is talking and no one is listening.

I recently decided to take a look what all of this broadcasting has done for the traffic stats for my own personal account and as I suspected my Twitter traffic numbers are SCARY BAD.

Here’s how the data shakes out over a three-month period.

I have an account with approximately 1,100 Twitter followers.  I spent a lot of time about 2 years ago trying to cultivate a following, but for more than a year, I have largely ignored my account.

I am pretty careful not to blindly follow back fake accounts, so my audience was grown organically.  I ran a quick check on Twitter Audit and my account brings back a 98% authentic rating. Not too bad.

Here is where it gets ugly. My account Tweets two to three times per day, six days per week.  On average, this breaks down to about 60 Tweets per month.  Here are the Impression metrics from November 2015 through January 2016 as reported on my Twitter Analytics Page.

My 180 Tweets earned 23.2K impressions, or on average 128 Impressions per Tweet.

The engagement stats are where it gets truly depressing.  My broadcasted message system led to a 0.8% engagement rate, 7 clicks on my content (Wow!!), 10 Retweets, and I was mentioned ten times in three months.

What Did I Expect?

As I wrote at the beginning of this piece, is Twitter still relevant?  Is it only suited for the Justin Bieber’s and Kim Kardashian’s of the world, celebrities with huge built in followings? With dreary financial results, are the social media pundits correct?  Is Twitter dead?

Intuitively, I know better.  Broadcasting without context or relationship serves very little purpose.  As you can see by my numbers, all of this activity is leading nowhere.

What I have surmised is missing in all of this is AUTHENTIC ENGAGEMENT. I hadn’t taken the time in more than a year to engage with my followers, so why should I expect them to care about anything that I have to say, or more importantly what I write.

Maybe this is the problem that Twitter faces. Gary Vaynerchuk wrote a really insightful article on this question a while back and the issues that he has noticed with his own levels of engagement.  I suggest that you give it a read.

For me it was clear that I made some mistakes, but the bigger question remains.

Is it still worth my time?

As a true marketer the only thing left to do to answer my questions is EXPERIMENT.

At the end of February, I created a small experiment to test the benefit of engagement.

The objective was simple. I created an experiment where I authentically engaged on Twitter for 30 minutes per day for 30 days.

I defined authentic engagement with the following best practices by different social media experts, and the actions included:

In addition, I continued my 60 pre-scheduled Tweets to see if my blog readership would be impacted by authentic engagement.

To determine success, I established some modest SMART social media goals for the project.

I started the process on February 18, 2016 and for the purposes of this post we will take a look at the activity for 30 days ending on March 18, 2016. During the course of that time frame, I had 60 pre-scheduled Tweets with links to my blog, and I had another 120 Tweets that were either replies or content sharing.

Here are the statistics from that 30-day time period.

With 84,400 impressions, I was able to realize a 263% gain in the impressions over the previous 3-month time frame and smashed my objective by 444%.

Here are the engagement stats. 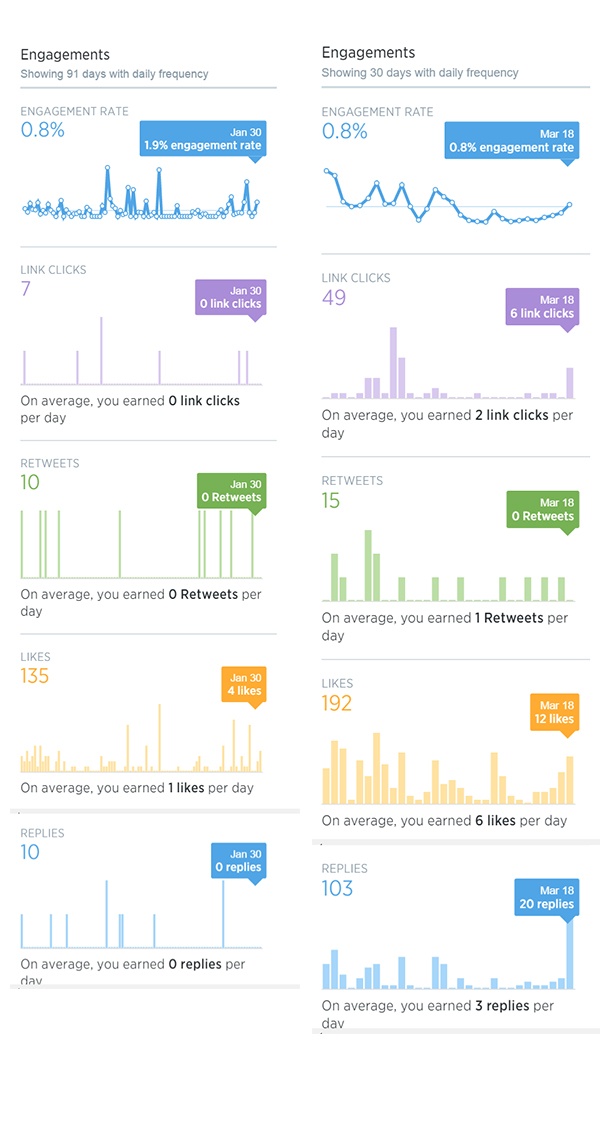 The engagement statistics were up substantially, as I had hoped. Link clicks were up with a 600% increase over the previous 90-day period and 500% of my goal.  While not all of the clicks were on my articles since I also curated some posts from some of the people I followed, there was a noticeable jump in traffic to my blog with 40 unique visitors during the experiment.

Likes, retweets and replies were all up for the month.

The third specific goal was the most noticeable, as I increased my engagement, the number of followers increased substantially. When I started my 30-day engagement project, I had roughly 1,100 followers. As of this writing, my new followers sit at 1,475, an increase of 375 real followers.  Way better than I expected.  In addition, to increasing my followers the biggest benefit as I see it are the quality of my engagements.

I met some really cool folks in my niche and have learned a lot from the assorted articles that I took the time to read.

What I found by working on this project, is that there are still people using Twitter effectively to engage with their audience.  There are also far too many people mailing it in, like I was doing last year.  If you carve out some time each day to spend with your following, you can realize some significant engagement results.

So now the question that I am left with is this.

If authentic engagement can increase an audience and drive traffic, is there a tangible business benefit to the activity that justifies the time and money spent on Twitter.  Is there a bottom line in terms of lead generation, and or sales that can be realized from the expenditure of time, money and engagement on Twitter?

Over the next 3 months I am going to test out different strategies to determine if Twitter is a viable tool to develop business leads.

Subscribe to our blog to get the results of the tests as soon as they are published.

Have you taken a look at your stats lately? I would love to hear how it is going for you.

David, a HubSpot Certified Inbound Marketer is the Chief Content Creator for InTouch Marketing and its clients.