Is Google Posts A Game Changer For Small Business SEO?

Google posts is beta testing a new feature on its search engine results pages that is providing a new way to engage online.

If you haven’t heard the news Google is experimenting with a new feature on its search engine that could be a game changer for Small Business SEO. The feature for now unofficially known as Google Posts will allow businesses to develop content that can be posted directly into search results associated with their search engine results page (SERP). As Mike Blumenthal reported in this post in early March, the new feature was designed for the U.S. presidential candidates and rolled out in early January. The posts appear in search results as cards for any query corresponding to one of the candidates. Here is an example from a recent search on Governor John Kasich. 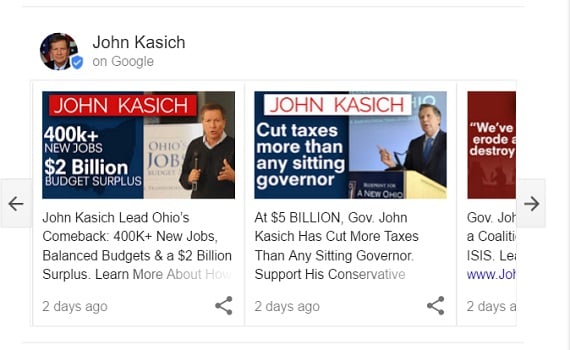 Image from the SERP from Governor John Kasich on April 15th, 2016 featuring the Google Posts carousel.[/caption] As you can see by the carousel, the new feature allows you to post multiple items and allows for the use of images, videos and as a first for Google, the platform allows animated gif’s to be displayed.

What is Google Posts?

There is a Google landing page that explains the new feature, calling it “An experimental new podium on Google” that allows you to “hear directly from the people and organizations you care about on Google” “Verified individuals and organizations can now communicate with text, images and videos directly on Google. Creating content is fast and simple, and once published, posts will appear instantly in search results related to the publisher. Each post can also be shared on popular social networks.”  All the posts have an "On Google" label and a blue "verified" checkmark. This suggests that the content is being published directly from the source.

Why Is This Important for Small Business SEO?

Recently, Google made significant changes to its search results pages by eliminating the ads along the right column.  According to an eye-mapping study released last year, most of us are ignoring the right side of the page rendering those ads useless. As a result, Google eliminated them altogether. This new offering may be viewed as an attempt by Google to develop more dynamic interface for its legions of users and also allow the search giant to combat the growing effectiveness of the Facebook Ad platform. The carousel allows users to build a social presence as content can be shared directly from the user, and it may also allow a new more vibrant advertising space as an alternative to the right-side space that was eliminated.

Some are suggesting that Google Posts is a Google+ reboot. Ron Amadeo on ARS Technica writes “It really seems like this is a Google+ reboot just for brands. The design definitely seems like Google+ with the Google+ branding stripped out, but this "social network" explicitly dodges being "social" AND any kind of "networking." Comments are gone, and you can't search for brands that have Google Posts or follow them. What's left is creating a profile, writing posts, and sharing pictures and video, and these posts will only be visible to people if they search for something relevant in Google.” If this new service becomes a permanent Google feature, this could be a game changing resource for small businesses to get their content seen. Businesses that implement the new cards would have instant access to publishing content directly on the Google search results, which in turn could potentially boost rankings significantly.

The bottom line is this new interface could be a way to allow users to host their best evergreen content directly on Google significantly increase reach through search. However, don’t be surprised if this new feature turns into another paid ad service for Google at some point in the future.

As Blumenthal explains in his article, as of early March, Google has opened up this feature to a handful of local businesses as part of a Beta Test. Only a select number of individuals and businesses currently have access to the new feature at the moment. Here is an example from the beta test from Andrew’s Jewelers in Buffalo, New York, an early adopter. 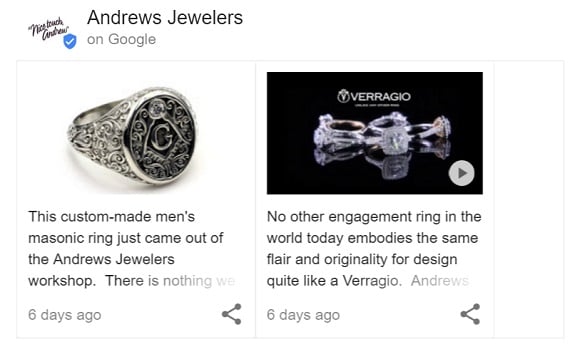 Image of Andrews Jewelers in Buffalo, New York from the SERP of jewelers in buffalo.[/caption]   As of now the only way to access Google Posts is through search results when queries are entered for organizations of people that are participating in the beta test. Much of the posts from the presidential candidates have disappeared.  Since the content is custom (not pulled from other Google sources such as Google My Business), if posts disappear, they may not be found again. Google has not made any decision or announcement if they will allow these cards to be used on a larger scale or whether it will be a paid service. For now, Google is gauging interest by asking for businesses and individuals to sign up to potentially use the service. A Google Landing page currently has a waitlist available for those that want to utilize the feature as it becomes more widely available.

If Google decides to make Google Posts widespread, it could be a win, win, win proposition. A win for Google in the form of a new ad space to replace the lost right side ad space.  A win for businesses that will allow them to engage their audiences in new ways, and increase their search rankings, and a win for users providing them a new way to engage with their favorite brands. What do you think?

David, a HubSpot Certified Inbound Marketer is the Chief Content Creator for InTouch Marketing and its clients.